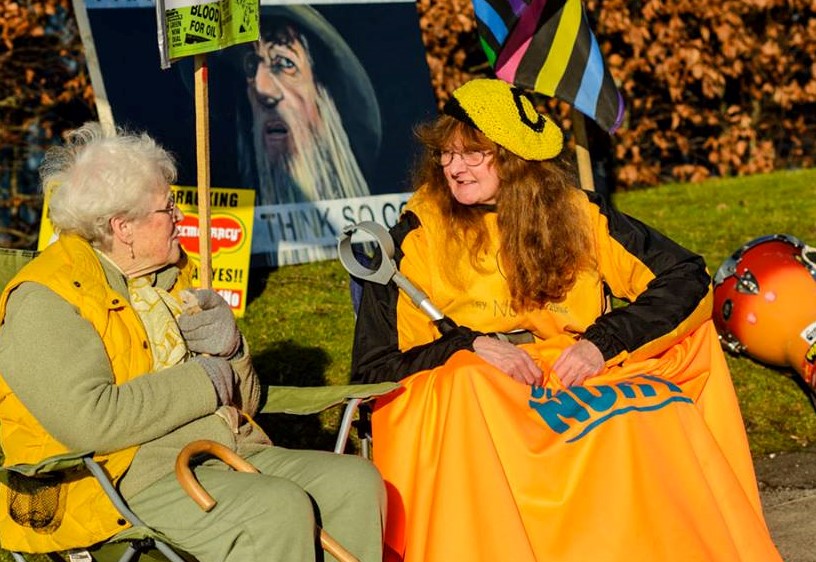 Campaigners demonstrated outside the Bolton engineering company, A E Yates, which has the contract for construction works at Cuadrilla’s Preston New Road site. The protest, involving Bolton Against Fracking and some members of the Lancashire Nanas, blocked access to the site. Information from the Environment Agency about fracking was taped to the site fence.

Opponents of Cuadrilla’s construction work at Preston New Road, Little Plumpton, continued their slow-walking protest in front of lorries delivering to the site.

On Friday, campaigners prevented workers from putting up fences along the A583 for an hour. They said on previous days, the fences had been placed too far across the carriageway without leaving enough room for ambulances to pass the temporary road works against on-coming traffic. Cuadrilla said: “The claim that the fences are ‘too far across the road’ is incorrect. Each day they are erected at the boundary of our roadworks.This creates a single lane for traffic which is managed by temporary traffic lights and the emergency services are aware of this so they can factor it into their journeys.”

Lancashire County Council told DrillOrDrop it was looking into allegations that Cuadrilla had breached conditions of the traffic management plan.

A group from Waking Up to Climate Change visits the camp, set up in a field alongside the proposed lorry route to Third Energy’s KM8 well, which the company has permission to frack

Food is donated to the camp.

Angus Energy confirms site upgrade works had been completed and that well intervention worked is continuing. The company said:

“We anticipate the re-entry of the original Brockham-X1 well being completed within the week with the work to complete and case the well taking 2 to 3 days thereafter.”

“The activity is being treated as what is known as a ‘work-over’ which is covered by an extant planning permission for production extending until 2036 granted in May 2007.”

A spokesperson said the company does not have planning permission for a side-track at Brockham and that no application had been submitted.