Anti-fracking campaigners spray painted graffiti at Barclays Bank in Stroud in opposition to the company’s support for fracking by Third Energy. Photo: Rising Up

Anti-fracking campaigners climbed onto a pile of rubble at Hillhouse Business Park in Thornton to protest about the storage of material for Cuadrilla’s site at Preston New Road. Security staff were filmed dragging them from the rubble. Photos: Ros Wills. Video: Eddie Thornton 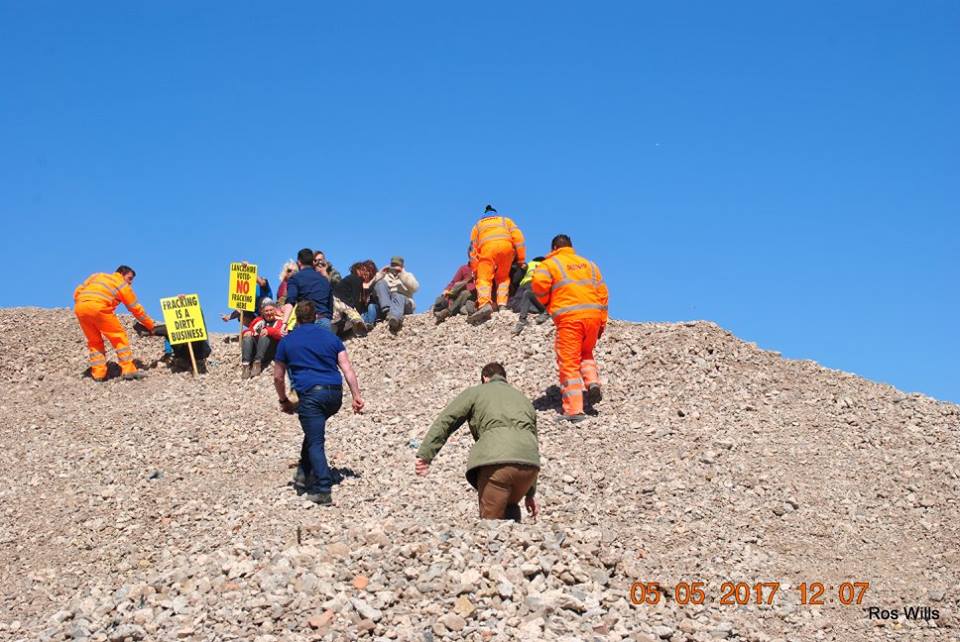 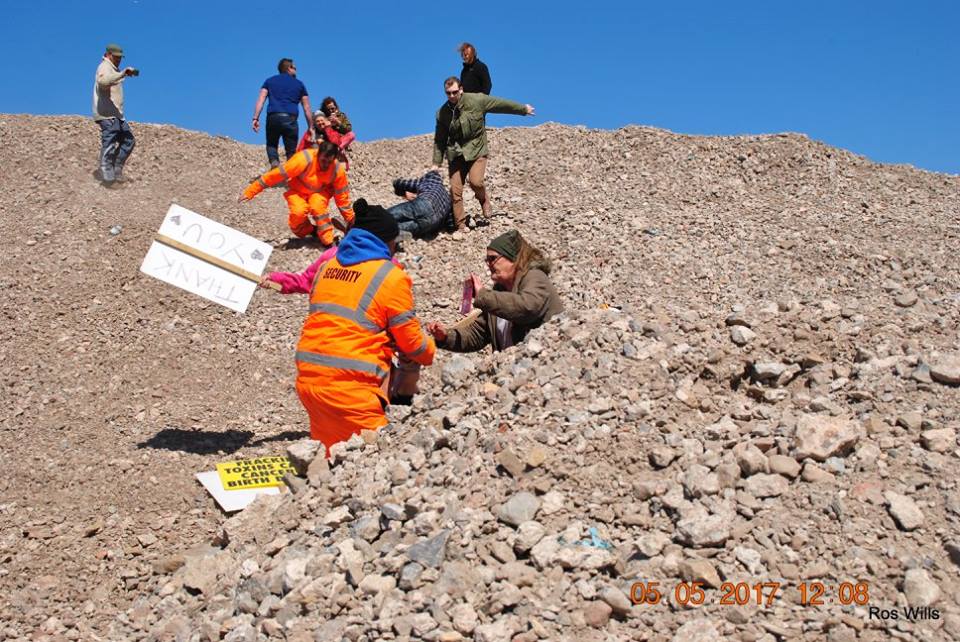 One person was arrested after a graffiti protest over Barclays funding of Third Energy at a branch in Queen’s Road, Bristol. Video: Rising Up

Opponents of Barclays’ ownership of the fracking company Third Energy protest outside a branch of the bank at Cornmarket Street, Oxford.

A man and a woman were arrested after a four-hour rooftop protest at Barclays Bank in Broadmead, Bristol city centre in protest at its funding for fracking. Another woman who used chalk to draw on pavements outside the bank was also arrested. The road and the bank were closed. 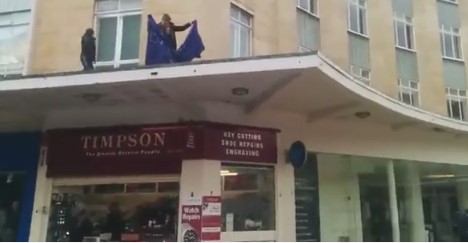 All slideshow photos above by Greenpeace UK

“Greenpeace is standing with the people of Lancashire against the industrialisation of the countryside for shale gas we don’t need. Lancashire said No to fracking, but the government overruled the democratic process and gave Cuadrilla the go ahead to frack for gas. Peaceful protest has caused months of delays and, since beginning work in January, this fracking firm has only really created a muddy field. But if the drill goes in, it will create noise, air and light pollution.

“In order to meet our climate targets, fossil fuels must stay in the ground. We do not need fracked gas and fracking is an unpopular, expensive and risky gamble. Together with campaigners from areas facing fracking, we’ve created a Frack Free Zone, blocking work at this site and asking the government to stop fracking in its tracks, and turn UK energy policy around. Cutting edge technologies, like renewables and battery storage, can drive economic growth and job creation for post-Brexit Britain, and give us plentiful clean power for decades to come”.

Lancashire Police said ten people, aged between 30 and 58, were arrested and charged with obstruction of the highway. Seven are due to appear at Blackpool Magistrates Court on 5 June and another three on 19 June.

Two women from Lancashire locked their arms together through a block of concrete at the entrance of the A E Yates depot in Bolton, blocking all vehicle movements at the site.

They left after four hours. There were no arrests. 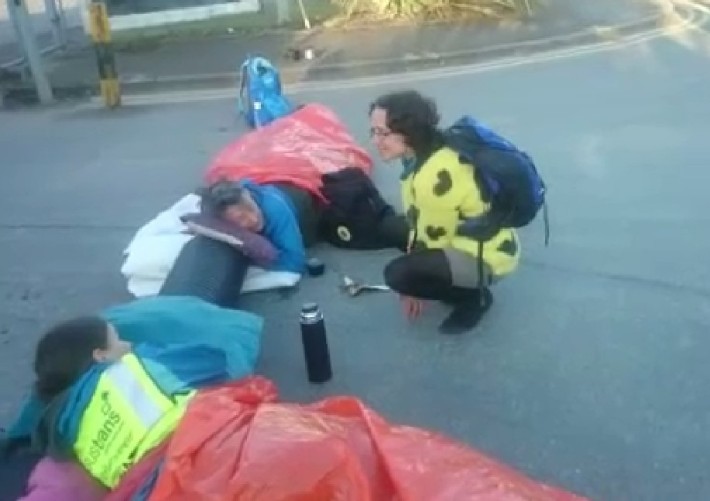 One of the woman, Sarah Shore, said they were taking the action to let all businesses in the fracking supply chain know that they should expect to be disrupted.

“There is a strong, sustainable and swelling campaign against the fracking industry. Campaigners have a thorough analysis of both the industry itself and the political context around it and are hitting hard at weak spots and bottle necks. Both yesterday and today saw blockades at the fracking site itself (near Blackpool) resulting in all work being halted. That, along with actions like today’s targeting of the supply chain in Bolton, is making investors very nervous.

“At a time when they should have been rocketing upwards, shares in the fracking companies main source of funding (AJ Lucas) are crashing down, dropping 73% of their value! [1] Fracking companies might have a central government supporting them at the moment, but with only 19% of the U.K being pro fracking [2], they don’t have the support of the people and very soon they won’t have the support from investors either.”

“A E Yates is facing regular blockades by local people from Bolton, Lancashire residents like ourselves and even national organisations like Reclaim the Power. This is resulting in severe disruption and loss of income for A E Yates. We will continue building on these actions until they terminate their contract with Caudrillia Resources. We faced a lot of aggression from the workers this morning and the woman fixed in the entrance were in a very dangerous situation, but they have calmed down now.”

Eight people have been arrested after several lock-on protests outside Cuadrilla’s shale gas site at Preston New Road this morning. The protests, which began at about 6.20am, closed the road at Little Plumpton for several hours. One lane of the road has now opened. The protesters were alleged to have wilfully obstructed the highway.

All the above slideshow photos by Ros Wills

“Cuadrilla unreservedly condemns the unlawful and irresponsible actions of those activists who completely blocked the busy A583 Preston New Road with absolutely no regard for local people going about their daily business.  This lead to severe delays causing heavy congestion on the nearby M55 motorway where a very serious collision ensued.  This kind of behaviour exposes the utterly selfish, attention seeking and reckless actions of a thoughtless minority.”

Opponents of drilling at Leith Hill celebrated May Day with a maypole on the Cock Roundabout on the edge of Dorking Town Centre. Photos: Ackroyd and Harvey and Martin Salter

Opponents of fracking join the Chesterfield May Day parade. 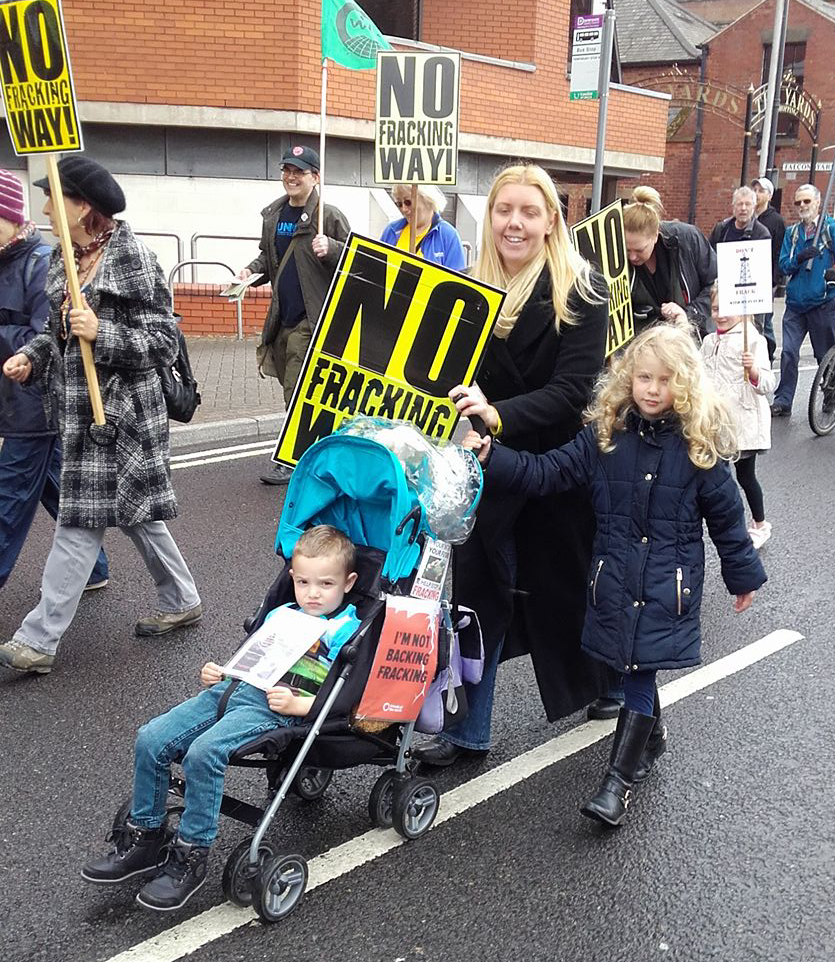