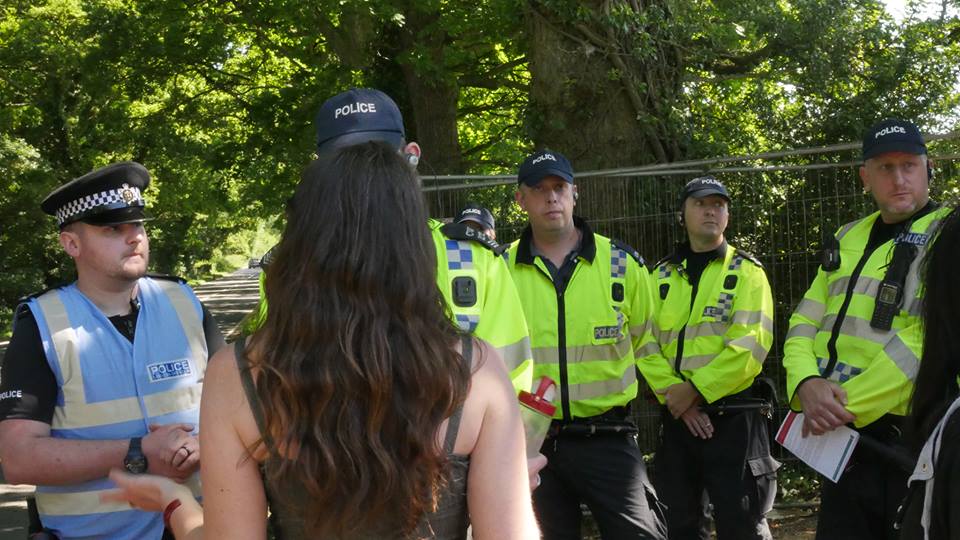 In this week’s update:

Two key figures in a mass community blockade of an Australian gas site met protesters outside Cuadrilla’s shale operation at Preston New Road in Lancashire. Simon Clough and Ian Gaillard are touring the UK with The Bentley Effect, a documentary film about the blockade.

“It has been a real pleasure to meet the huge number of wonderful people from all walks of life and all demographics who are standing up to protect their community, the land they live on and the underground water from this unsafe and dangerous industry.

“This government of the UK, under Theresa May, is completely under the spell and complicit with the gas industry and police appear to facilitate fracking by martial law.”

“If unconventional gas is so safe, why can no farmer get insurance protection from a gas accident that could close down their farm?

“Farmers are unable to continue effective farming once gas drilling begins, regardless of the industry spin. In many cases Australian farmers have lost their underground water and are under endless pressure from the drilling companies to accept new wells.

“Farmers living in or near a gas field are also troubled with constant illness, not to mention noise and light pollution.”

Opponents of Cuadrilla’s shale gas plans in Lancashire handed in a petition with around 1,000 signature to the company which has been doing the site construction work. The petition asked A E Yates to end its current contact and not take work with fracking companies in the future.

“Having 1,000 signatures on this petition shows how unpopular fracking is and how much off a risk here is to companies involved with it.

“I was aware that there would be resistance to the project and, at the end of the day, I take the view that the Secretary of State – whether misguided or otherwise – has said that fracking is desirable for the country. He says it is essential for the country”.

Opponents of plans by UKOG to explore for oil at Wood Barn Farm, Broadford Bridge, carried out slow walking protests in front of delivery lorries. One person was arrested on suspicion of obstructing the highway. The rig was installed at the site near Billingshurst today and the company told investors it had all the permissions it needed to carry out drilling operations. DrillOrDrop reports here and here. Photos below: Weald Oil Watch.

Photo: from video by Natalie Middleton

A small group of protesters gathered outside Cuadrilla’s offices in a demonstration against the company’s operation to frack for shale gas at Preston New Road near Blackpool.

A representative of Cuadrilla asked the group to leave.

The anti-fracking group, Scotland’s Knitting Grannies, gathered outside the Scottish Parliament to urge people to contribute to the government’s consultation on unconventional oil and gas. The deadline for comments is the end of the month.

Knitting Grannies outside the Scottish Parliament, 25 May 2017. Photo: Richard Dixon

Knitting Grannies outside the Scottish Parliament, 25 May 2017. Photo: Friends of the Earth Scotland

The two-day trial started of four people who carried out the first lock-on protest outside Cuadrilla’s shale gas site at Preston New Road.

Eddie Thornton, Jared Dunne, Louise Hammond and Joseph Boyd were accused of a public order offence after they locked their arms through tubes outside the site on 31 January 2017. They all deny the offence. The case was adjourned until 12 June 2017 when the district judge, Jeff Brailsford, will announced his verdict.

The Blackpool Gazette reported that 20-year-old Callum Eden was found not guilty at Blackpool Magistrates Court of obstructing the highway in a “slow-walk” protest on the A583 outside the Preston New Road  site.