Cuadrilla’s Preston New Road site grabbed the attention of readers during 2018. Seven of the 10 most-read posts on DrillOrDrop in the past 12 months were about activities or protests at the site.

Also in the top 10 posts with readers were Europa’s surprise announcement that it was  abandoning drilling plans at Leith Hill, Egdon’s failure, again, to secure permission for long-term oil production at Wressle and a spat between two weald exploration companies.

We were delighted to see a guest post in the top 10 this year. We always value contributions from readers and look forward to more guest posts in 2019.

In reverse order, here are the posts readers thought were the most important. Click on the red title to go to the original post.

DrillOrDrop published a number of guest posts this year, sharing the knowledge, experience and opinions of contributors with our audience.

This article, by Fylde geologist Trina Froud, discussed the importance of sub-surface surveys, and how the geological interpretation of survey results has changed over time. It also questioned why the latest seismic survey results for Preston New Road were not published until after Cuadrilla had obtained all the permissions it needed to start fracking,

The article attracted the second highest number of comments for any post this year.

9. UKOG responds to Angus comments on operations at Broadford Bridge 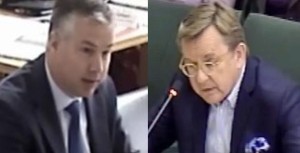 This post was prompted by comments by Paul Vonk, managing director of Angus Energy, that UKOG’s Broadford Bridge oil well in Surrey had suffered “operational  issues” due to the formulation of the drilling mud. Stephen Sanderson, executive chairman of UKOG, issued a statement to DrillOrDrop refuting the claims and suggesting that:

Traffic lights were much on people’s minds as Cuadrilla started fracking at Preston New Road.  A seismic event of 0.8ML (local magnitude) while the company were fracking on 26 October counted as a “red light” tremor under the regulations and meant the company had to pause operations for 18 hours.

DrillOrDrop’s  Tremor Tracker has monitored seismic events at Preston New Road since fracking began, using data provided by the British Geological Survey.  By the end of 2018, the BGS recorded 57 events, including two more “red-light” tremors and four “trailing events” (tremors of more than 0.5ML which occurred after the company had finished fracking for the day).  The largest trailing event to date,  measuring 1.5ML, was felt by people in the area.

DrillOrDrop were outside Cuadrilla’s Preston New Road site for the first day of fracking.  Opponents of the operation grabbed a lot of the media attention with two lock-on protests, one involving a van parked outside the site gates.

“What we’re doing is actually the only way we’re going to make progress whilst keeping people warm in their homes and cooking their food.”

Egdon Resources made another bid for long-term oil production at Wressle after two previous planning applications were refused and an appeal rejected at a public inquiry. The company submitted a revised application to North Lincolnshire Council and DrillOrDrop reported live as councillors rejected the proposal again. Egdon said it intended to appeal once more. 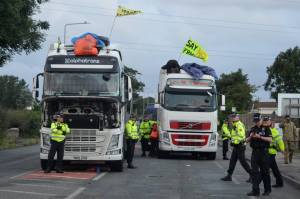 A packed public gallery at Preston Crown Court listened in silence as three men were given prison sentences of up to 16 months for their part in a 99-hour lorry-surfing protest at Preston New Road.

One of the defence barristers had argued that:

“It is a mark of a civilised society that it can accommodate protest.”

“No cause can trump every consideration and everyone’s rights.”

See story 1 below for what happened next.

Opponents react to the news that Europa Oil and Gas is pulling out of Bury Hill Wood. Photo: Fil Jackson, 4 September 2018

After a 10-year battle against local opposition, Europa Oil & Gas announced that it was abandoning plans to drill for oil at Bury Hill Wood (also called Holmwood), near the Leith Hill beauty spot in Surrey.  The decision followed the refusal of the environment secretary, Michael Gove, to renew the lease for the site, on Forestry Commission land.

“Don’t let anyone tell you protests don’t achieve anything.  They do”

Europa said it was disappointed and would carry out a full evaluation of other possible sites in the area.

Just days before Cuadrilla were due to begin fracking at Preston New Road, a High Court judge ruled that the company must wait for a challenge to be heard the following week.  Fylde campaigner, Bob Dennett, brought the case, seeking a judicial review of Lancashire County Council’s emergency planning for the fracking site.

“This is absolutely fantastic news.  I am ecstatic”

Cuadrilla said it had not planned to start fracking until the following week anyway and described Mr Dennett’s application as:

The first three seismic events caused by fracking  at Preston New Road were recorded by the British Geological Survey on the 18th October.  The tremors were all below 0ML but they were followed by a 0.3ML event the next day.

The event was too small to be felt at the surface and did not count as an amber event under the traffic light monitoring system as Cuadrilla were not fracking at the time.

By the end of 2018, there had been three “red light” tremors of magnitude greater than 0.5ML, occurring while fracking was taking place.  These required Cuadrilla to suspend operations for 18 hours. The company called for the traffic light system to be relaxed and threshold levels raised for a red-light event. 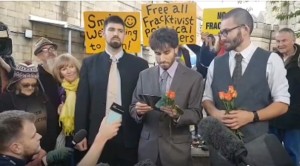 Three protestors, sentenced for up to 16 months after a lorry-surfing protest at Preston New Road, (see story 5 above) had their sentences quashed by the Court of Appeal.

The three protestors were each given a conditional discharge for two years, taking account of the time the men had spent in prison.

The Judicial Conduct Investigations Office started an inquiry into links between family members of the judge who passed the original sentences and the oil and gas industry.