Drilling is now underway at Biscathorpe, Misson and West Newton – and what will happen this month at Preston New Road and Tinker Lane? Also in February, the inquiry reconvenes into IGas testing plans at Ellesmere Port.

You can keep up with the news here with DrillOrDrop’s digest of headlines about fracking, shale and onshore oil and gas, updated daily. Click here for headlines from previous months.

Location (marked in white) of UKOG’s Dunsfold site and access track, based on information in the company’s leaflet. Image source: Google Maps

What are the new rules about planning decisions at Lancashire County Council. The Lancashire Evening Press reports that the council is scrapping 30 minute speaking slots by organisations at planning meetings. It is also reducing the 4 minute public slots to 3 minute and allowing a maximum of 15 speakers in favour and 15 against. 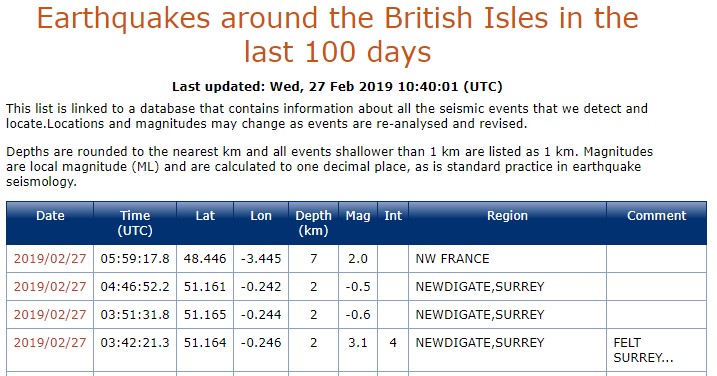 Ineos to spend £1bn in UK as billionaire owners save £4bn in tax. The Telegraph reports on Ineos plans to upgrade the Fortes North Sea pipeline and its Grangemouth refinery and build a new chemicals plan in Hull. 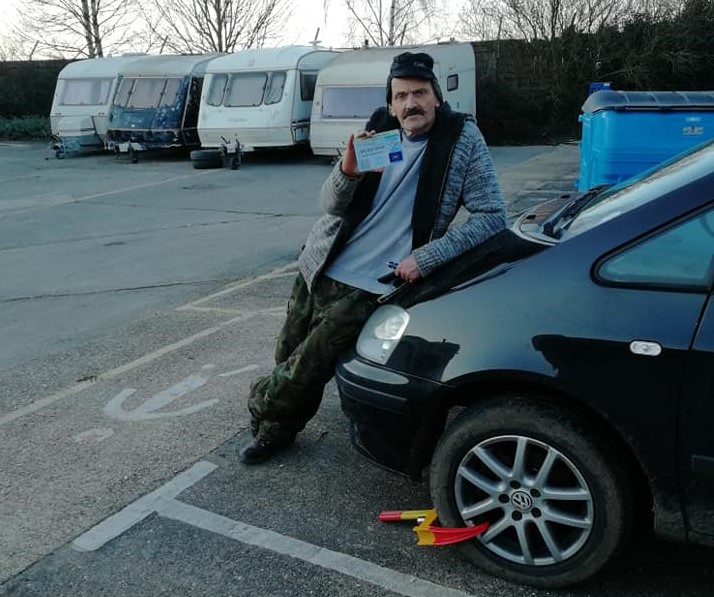 Angus Energy to seek permission for 2-year well test at Balcombe – resident says it is running away from problems. DrillOrDrop report

Wall Street loses faith in shale. Oil Price reports a decade’s worth of promises have failed to materialize, and Big Finance is cutting some of its ties with smaller shale drillers who have not delivered.

New technical director at Cuadrilla. DrillOrDrop report on confirmation at Mark Lappin is retiring from his full-time post at Cuadrilla.

Britain’s blocked fracking pipeline. Money Week reports on whether fracking has a future in the UK 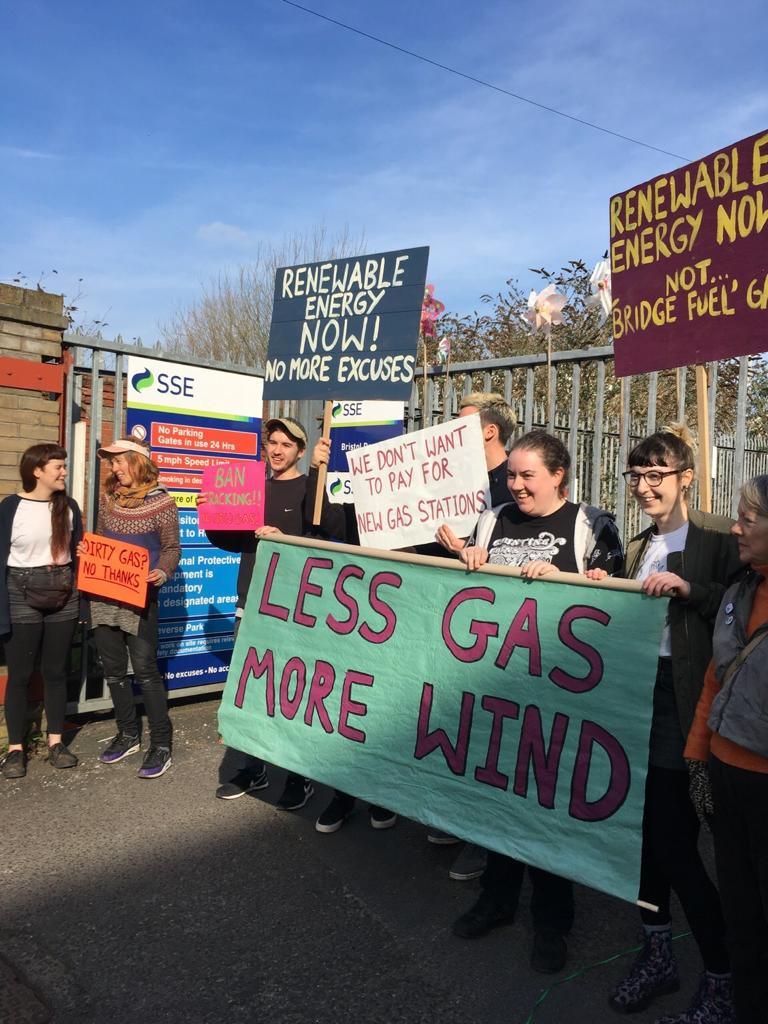 Centrica’s value plunges £1bn as customers defect. Energy Voice reports shares in Centrica sank around 12% after it warned of an expected hit to 2019 performance from the price cap on default tariffs.

Fracking in Kirby Misperton could start later this year. Holiday Radio and Scarborough News pick up DrillOrDrop’s report from 13 February 2019 on Third Energy’s drilling and fracking commitments. The Press (28/2/2019) 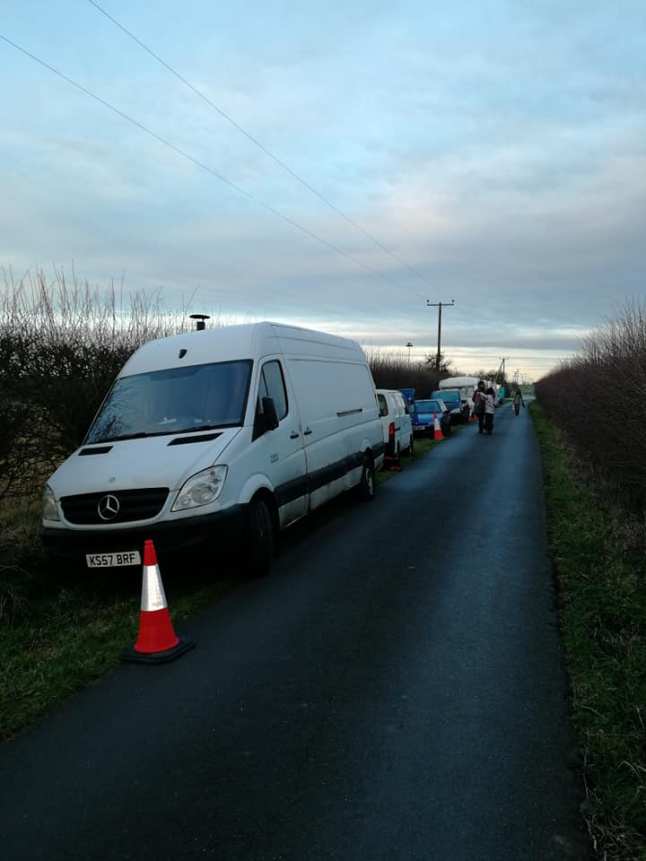 Rising British Gas bills are being invested in fracking – increasing prices more, say protesters. Inews reports on the campaign by Reclaim the Power to oppose investors in fracking

UK fracking friends and foes find common cause. The FT reports on confusion at ministers’ mixed signals on fracking.

Ban gas boilers in new homes by 2025, says Committee on Climate Change. Report by the CCC recommends that no new homes should be connected to the gas grid by 2025 but should be super-efficient and heated using low carbon energy instead. The Guardian, BBC News

Latest convictions from Blackpool Magistrates court. Blackpool Gazette reports that 46-year-old Fiona Smith was found guilty of obstructing the A583 outside Cuadrilla’s fracking site when she sat down in front of delivery vehicles. She received a six-month conditional discharge and ordered to pay £125 costs and a £20 victims’ surcharge. 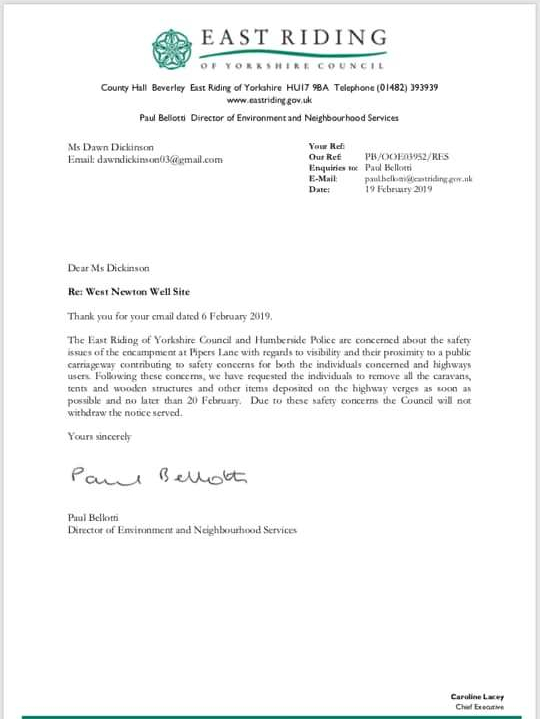 Deadline for removal of equipment and caravans from roadside verges at West Newton A well site. East Riding of Yorkshire Council requires campaigners monitoring the West Newton A wellsite at New Ellerby, north of Hull, to remove caravans, tens and wooden structures from the verges by today.

People living near Newdigate in Surrey reported another earth tremor this evening – the second in a week. DrillOrDrop report, Surrey Live

Revealed: How the tobacco and fossil fuel industries fund disinformation campaigns around the world. DeSmogUK reports on 35 thinktanks in the US, UK, Australia and New Zealand. 32 have taken direct donations from the tobacco ndustry, 29 from the fossil fuel industry and 28 from both.  Two networks, based around the Koch brothers and Atlas Network, are involved in orordinating or funding many of the thinktanks.

Residents and campaigners who have been monitoring Rathlin Energy’s oil and gas site in East Yorkshire for more than a month are making a direct appeal to the county council to drop its threat of eviction. DrillOrDrop report 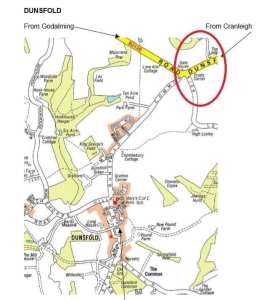 Frack’s lacking backing. Theresa May has been urged to back fracking as company says it has found ’30 years worth of gas’ in East Midlands. The Sun reports claims by Ineos that drilling results from its field in Nottinghamshire suggest “US levels” of shale gas. Ineos urged the government to speed up the planning process. Also reported in the Express (21/2/2019) and the local Johnstone Press titles (21/2/2019)

IGas operational update. IGas says its Springs Road-1 well has encountered shales at 2,200m and coring is to begin imminently. The company confirms that the Tinker Lane well has been plugged, abandoned and preparations are being made to restore the site.

The pro-fracking letter writers with links to oil and gas industry. Channel 4 News reports on the industry links of the signatories of a letter calling for a relaxation of the regulations on fracking-induced seismicity.

Angus Energy placing. Angus Energy announces a placing of 55,000,000 new shares at a price of 4p, to raise £2.2m. The money will be used to pay down the loan to YA II Pin Ltd and Riverfort Global Opportunities PCC Limited.

UK Oil & Gas plc increases stake in Horse Hill by acquiring 6% from Doriemus. UKOG says things its stake in HHDL to 77.9%, which in turns holds 65% of the Horse Hill project.

Third Energy commits to frack a well a year for four years under new work programme for its Ryedale licences in North Yorkshire. DrillOrDrop report 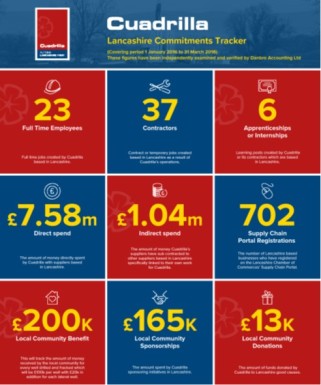 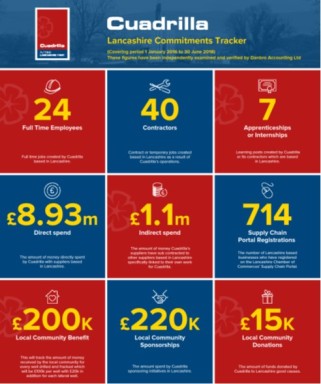 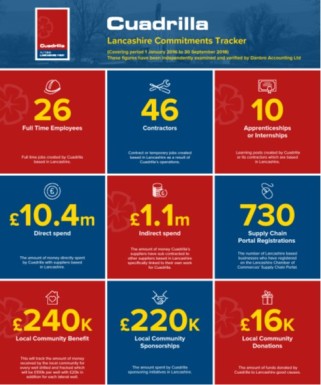 Energy Minister says review of fracking-induced seismicity is up to OGA. Claire Perry, in reply to a question by Sir Patrick McLoughlin, says:

“We have set out very clearly our need to soberly and scientifically explore this potentially important resource. We rejected the companies’ request during the process of extraction from the first well to change the regime, on the basis that it was fit for purpose. I have been very well aware of all the scientific suggestions that somehow this regime should be reviewed. Of course, we now have an independent regulator, the Oil and Gas Authority, and it is within its remit, should it wish, to look at the science. For me, it is a scientist-led decision—it is nothing to do with politicians.”

Shaking with fear. Government accused of killing fracking by forcing drilling forms to suspend work over tiny tremors. The Sun picks up the letter to Times on the traffic light system for fracking induced seismicity.

The Sun says: UK ought to stop running scared of eco-warriors and give fracking green light. The Sun says in an editorial: “Of course fracking has to be safe. It’s why we have rigorous safety standards. But we are in danger of going overboard”

“THE Government’s refusal to give the shale gas industry the green light is a woeful failure of leadership.” 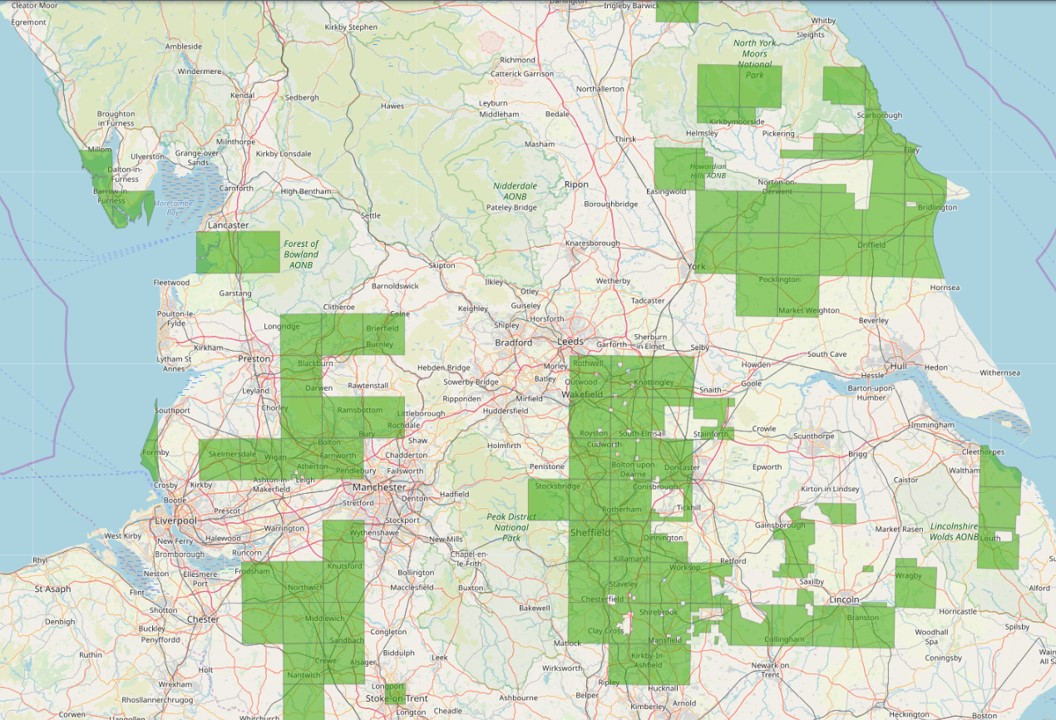 Weekend long read: Promises, promises. Can the operators meet their drilling commitments and does it matter? DrillOrDrop report

Local communities’ legitimate concerns about fracking need to be heard. Tom Fyans, writing in the Times, says the public needs reassurance that the government is listening to voices beyond those of the shale gas industry.

Fracking opponents pleased that regulator has no plans to raise tremor safety level. The Blackpool Gazette reports on reaction to the comment by the Oil & Gas Authority that it does not plan to review the traffic light system.

Anti-fracking campaigner to speak in Doncaster. Doncaster Free Press reports that Sharon Wilson, a former oil and gas industry employee, is to speak at a meeting on 12 February at C-View in Doncaster.

Protest outside court in Lincoln after environmental campaigners charged. Lincolnshire Live reports on an initial hearing in the case of Geoff Jones and Karen Williams, who were arrested on 4 January at the Biscathorpe oil exploration site. They pleaded not guilty and a trial will be held in May. 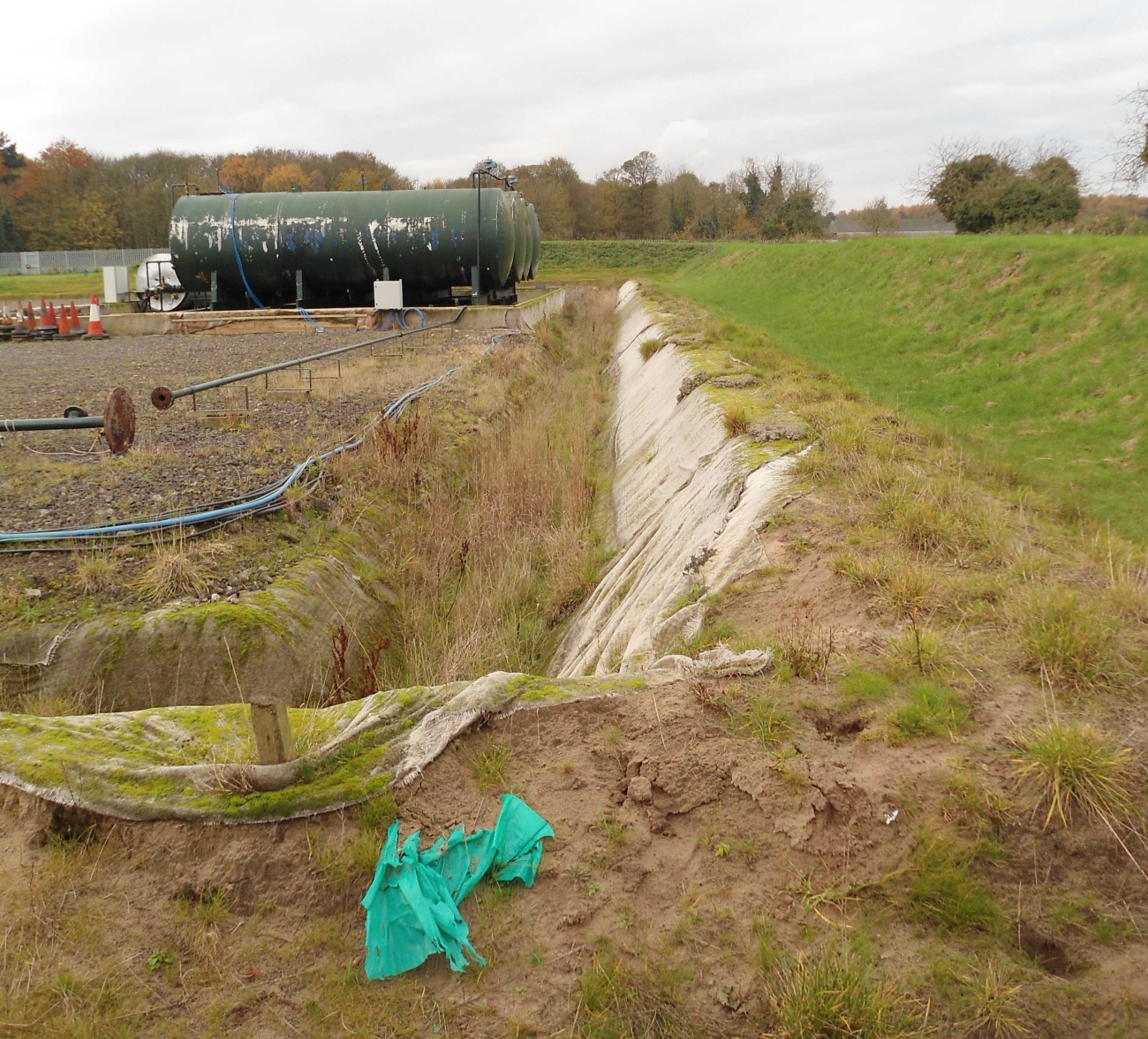 Wressle wellsite, near Scunthorpe, during site visit during inquiry, November 2017. Used with the owner’s consent

Claire Perry defends shale gas fracking. Utility Week reports that on a Sustainability Leaders Forum at which the energy minister defended fracking for gas. She added:

“We’ve obviously been very clear about our environmental limits, which I think are the best in the world, and if [fracking] companies can operate within them then they’ll be welcome to do so.”

Government accused of breaking its own guidelines on shale gas consultation. DrillOrDrop report

UK Oil and Gas visit Arreton ahead of planned 2020 drilling campaign. The County Press reports UKOG visited its proposed Arreton sites where the company wants to start drilling in 2020. On the Wight (6/2/2019)

Police challenge Prevent critics to “stand up and be counted”. The Guardian reports on comments by Simon Cole, the national policing lead for the Prevent anti-terrorism programme, who challenged opponents to influence policy and suggest improvements by participating in a review.

The Guardian view on fracking: the end can’t come soon enough. The Guardian editorial says launching a new fossil fuel industry was a bad idea and a coalition of localists and environmentalists appears close to defeating it.

‘She doesn’t have to live in the north of England without a job’: Britain’s richest man Sir Jim Ratcliffe blasts punk fashion icon Vivienne Westwood over her opposition to fracking. MailOnline reports Jim Ratcliffe has criticised Dame Vivienne Westwood for her opposition to fracking. she described him as a “liar bent on destroying the environment”, the website says.

“Misson Carr and its wildlife simply shouldn’t be put at risk due to this sort of extractive operation,” said Janice Bradley, head of conservation.

“SSSIs are supposed to carry a high degree of protection in the planning system, but sadly permission was granted despite us putting forward an extremely strong case.”

Events diary for February 2019 and beyond. DrillOrDrop