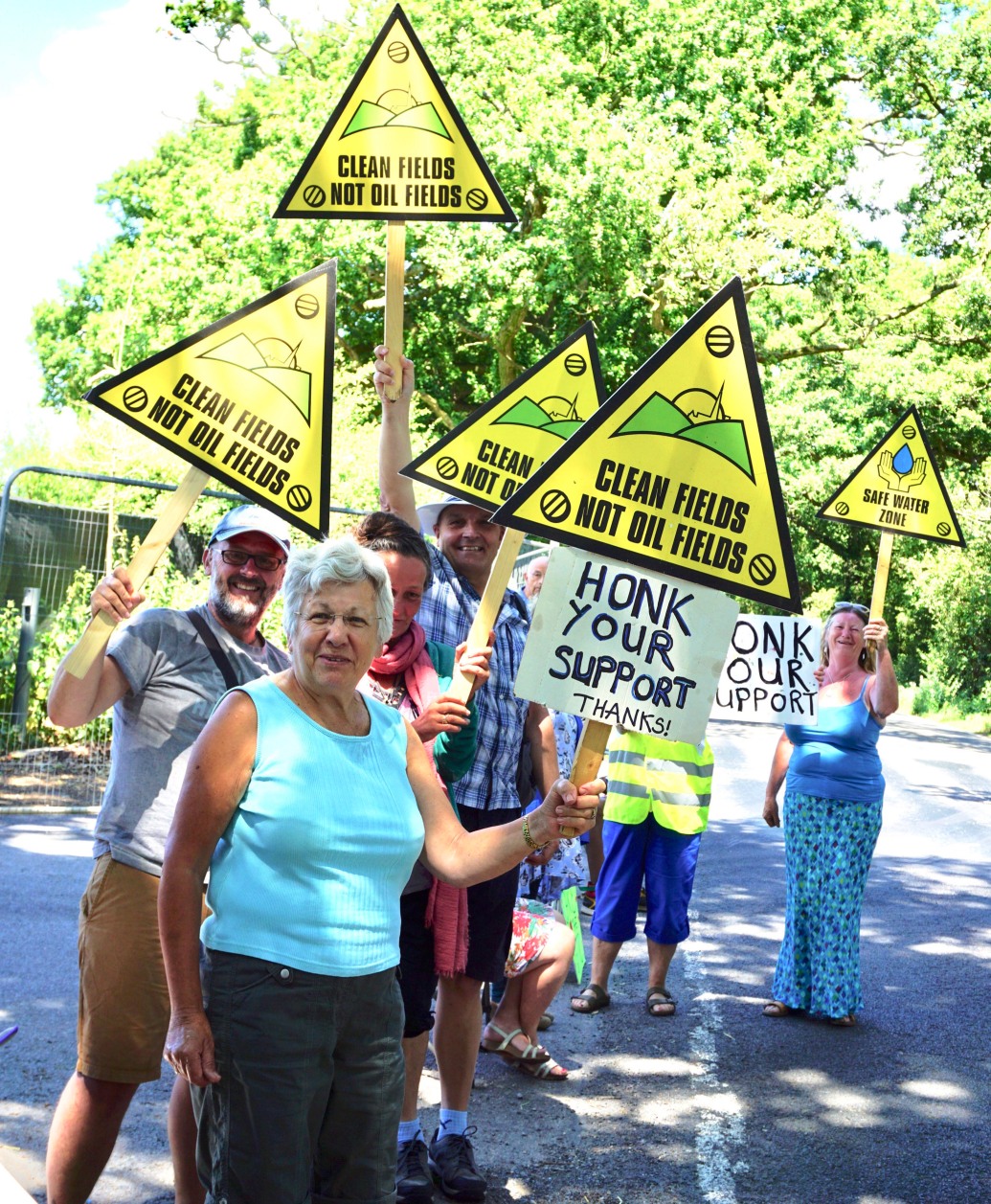 Reclaim the Power estimated 200 people took part in a rally calling for divestment in fossil fuels. The event, at Cuadrilla’s Preston New Road site near Blackpool, included local representatives of trades unions and labour organisations. Some had signed a statement calling for a ban on fracking. DrillOrDrop report

Campaigners locked themselves to two vehicles on the road outside Cuadrilla’s Preston New Road site near Blackpool early in the morning.

Lancashire Police said they released themselves by 10.50 and a contraflow on the road was lifted.

Indigenous leader and activist, William Hawk, urged campaigners to “let go of your fears”. During a visit to Cuadrilla’s shale gas site he said:

“Fear is what they want you to feel because they know it’s easy to put fear into people.”

Reclaim the Power said two activists from the nearby protest camp locked into arm tubes for six hours, blocking the site entrance. Two protesters from Bristol climbed onto bamboo tripods. They were brought down by police after seven hours.

All four were arrested and charged with aggravated trespass.

Gillian Kelly (73), her son Sebastian (48) and granddaughter, Megan (19) locked their arms into boxes labelled Families against Fracking, outside the gates at the site off Preston New Road. Another member of the family, Paul Martyn (61), also took part in the protest. More details in DrillOrDrop post

Reclaim the Power said more than 100 women protested outside the Preston New Road about what they regard as increasingly violent tactics by police and security guards at the site. More details in DrillOrDrop post 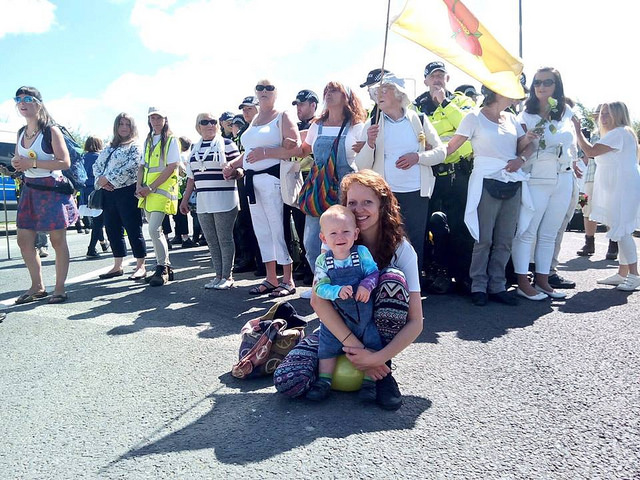 High Court baillifs working for Lancashire County Council evicted a camp of tents and a tower outside the Preston New Road site between 6am and 9am.

A spokesman for Lancashire County Council said this afternoon:

“A highway verge beside a busy A-road is a dangerous place for a camp, and as the land owner and highway authority we have a duty to consider the safety of the protesters and other road users.

“We take possession proceedings in respect of various encampments on the highway and in this case in particular the structures erected affect sight lines and the safety of people using the road.

“In recent weeks, after serving notice on the occupants to leave this site, we have obtained a High Court Writ of Possession. This morning we have enforced the writ and will be taking further action to secure the area.” 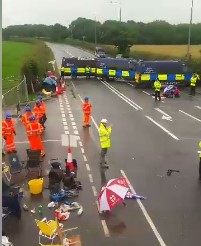 A lock-on protest outside Cuadrilla’s shale gas site at Preston New Road near Blackpool, closed the road to traffic in both directions. At 8.30am, Lancashire Police said delays and disruption were expected throughout the day.

Fylde Police Facebook page announces at 3.45pm that an additional three sergeants and 18 PCs from other forces will be policing protests at Preston New Road. The officers have been supplied to Lancashire under the “mutual aid” arrangements. The post said they would:

Opponents of Cuadrilla’s shale gas operation in Lancashire have continued to demonstrate outside the supply company, Marriott Drilling. Campaigners took part in slow-walking protests as vehicles left the site, thought to be heading to Preston New Road.

Opponents of oil exploration at Broadford Bridge in West Sussex rallied outside the site gate for a second day in protest at the Environment Agency’s permit for acidisation and flow testing. DrillOrDrop report 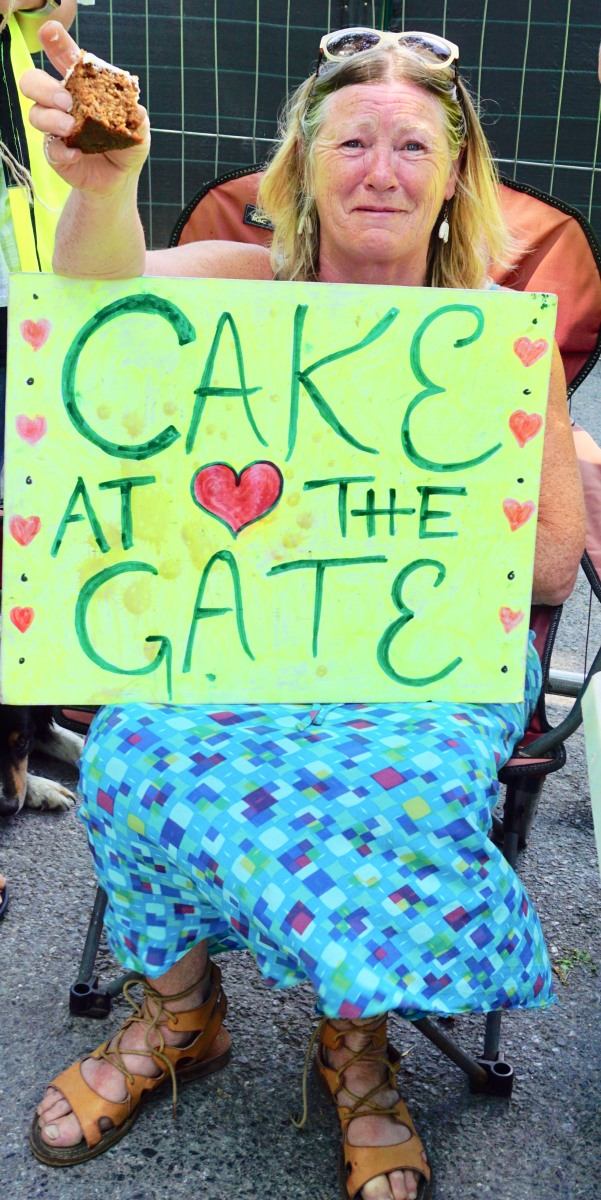 Campaigners and residents took part in a rally outside UKOG’s Broadford Bridge site near Billingshurst to protest at the Environment Agency’s decision to issue a permit for flow tests using acidisation. They promised they would be back every day for a “cake on the gate” event, where they will hold placards urging motorists to honk to support their call for “green fields not oil fields”.

“The Environment Agency has said no such acidisation is taking place in Sussex – this could be a first and we could be guinea pigs. They know very little about the whole process the difference is that in America they have analysed and found adverse effects.

“Here (at Broadford Bridge), we know from evidence from a former EA employee, that there is a fault that could transmit any of the liquids of the chemicals across to our water supply – that effects farming, fishing  and our drinking water – this is very serious.”

One of the campaigners was West Chiltington resident and retired civil servant Sue Goodard, 69 (below).

“This is the first time in my life that I’ve every done anything like this – so it shows how awful this is that I’ve been driven to do this  – we could end with 1,000 of these sites across the Weald.

“I’m thinking of the future of my children and my grandchildren’s future when there is an alternative way – we don’t need this oil by this means where it can do so much damage.”

A small group of anti-fracking campaigners picketed the entrance of Cuadrilla’s headquarters at Bamber Bridge near Preston. The action was part of Reclaim The Power’s month of “Rolling Resistance” against fracking plans at Cuadrilla’s Preston New Road site. 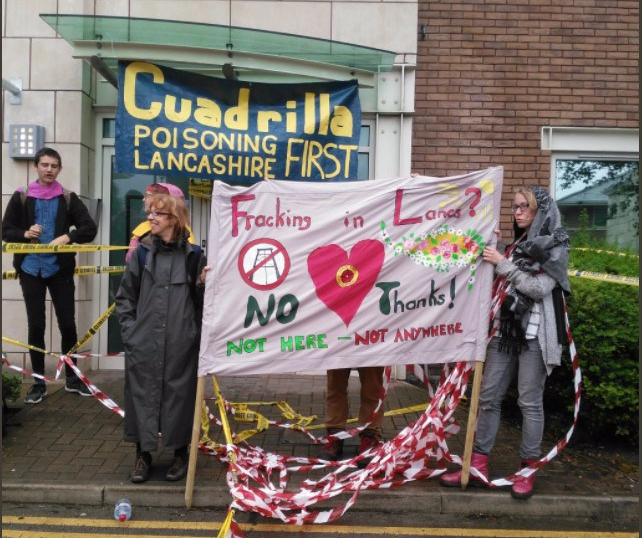 A police spokesperson said Kate McCann, of Lytham St Annes, Tamla Hunter, of Manchester, and Andy Cooper, of no fixed address, were charged with a Road Traffic Act offence. Kate McCann and Andy Cooper were also charged with obstructing the highway and an offence under Section 241 of the Trades Union Act. They will appear before Blackpool Magistrates next month. 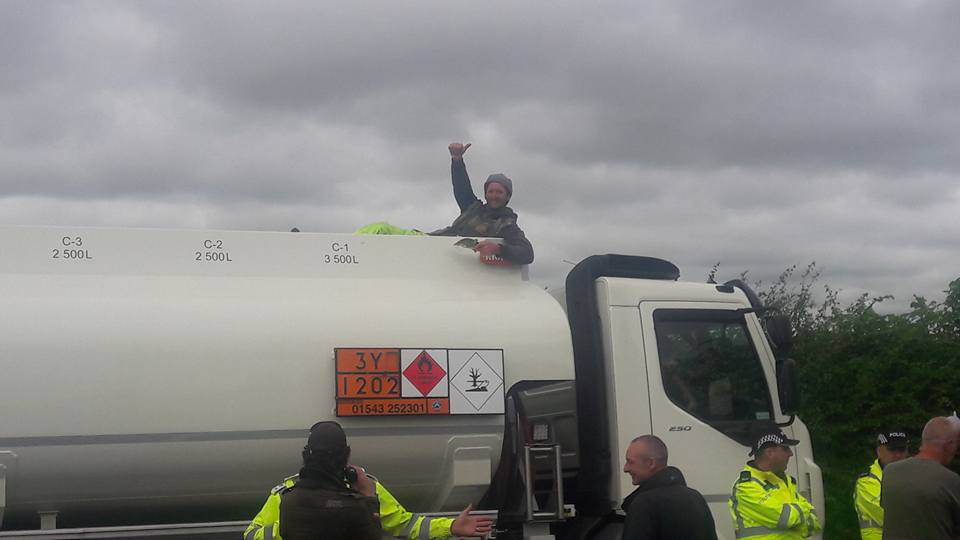 A protester was hit by a vehicle leaving the shale gas site.

Ashley Robinson, said he was attempting to slow-walk the vehicle when the accident happened.

“I’m quite shocked that it has been suggested I threw myself in front of a truck. I was exercising my right to peaceful protest and attempting to slow-walk the vehicle out of the site, when it hit me.

“The driver appeared not to take any action to avoid me, as suggested by some media reports, and he did not even stop after hitting me.

“This is my first time I’ve ever been involved in a campaign like this. I am a local man and father from Blackpool. Since Cuadrilla arrived at Preston New Road, I have been part of a peaceful protest against their undemocratic presence in Lancashire. I believe that fracking is detrimental to the future of the climate and our children’s health and I will continue to oppose it.”

“Upon leaving the Fracking site, a works vehicle has come into contact with a campaigner despite the driver taking evasive action to try and avoid him.

“The driver of the vehicle was indeed spoken to by police, provided a negative breath test and all other personal and vehicle checks were correct and in order.

“At this time, the campaigner involved has declined to speak to police regarding this matter and we are not aware of any injuries being sustained during the incident.

“This matter was dealt with by an experienced Roads Policing Officer in accordance with force policy and as per any other non injury road traffic collision.”