Campaigners from across the UK gathered outside Cuadrilla’s shale gas site near Blackpool for a demonstration today in support of food growing and against fracking. See DrillOrDrop report from the event 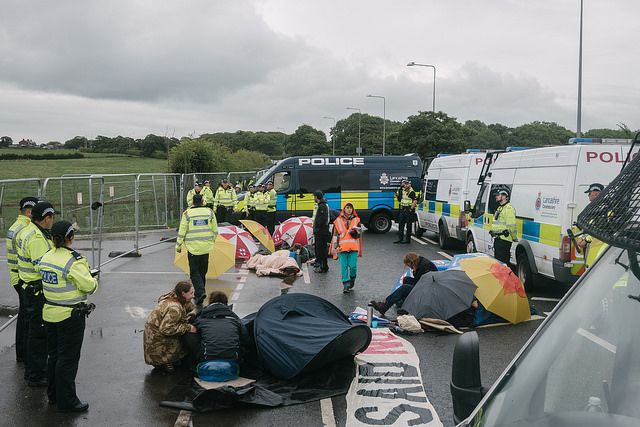 The organisation, which is coordinating a month of anti-fracking action in Lancashire, said the blockade started at 5.15am.

The protesters used arm-tube devices to lock themselves together in pairs. Security guards and police prevented one pair “locking-on”. Police had cut the protesters apart by midday.

One of the protesters, Nicole from Mosborough Against Fracking, said:

“Fracking isn’t just threatening the water and peoples health up here in Lancashire – it’s happening right across the country. I live in an area that is currently being seismic surveyed by INEOS and we’re determined not to let them get as far as Cuadrilla have here.”

Lancashire Police said the following people were arrested and charged with highway obstruction. 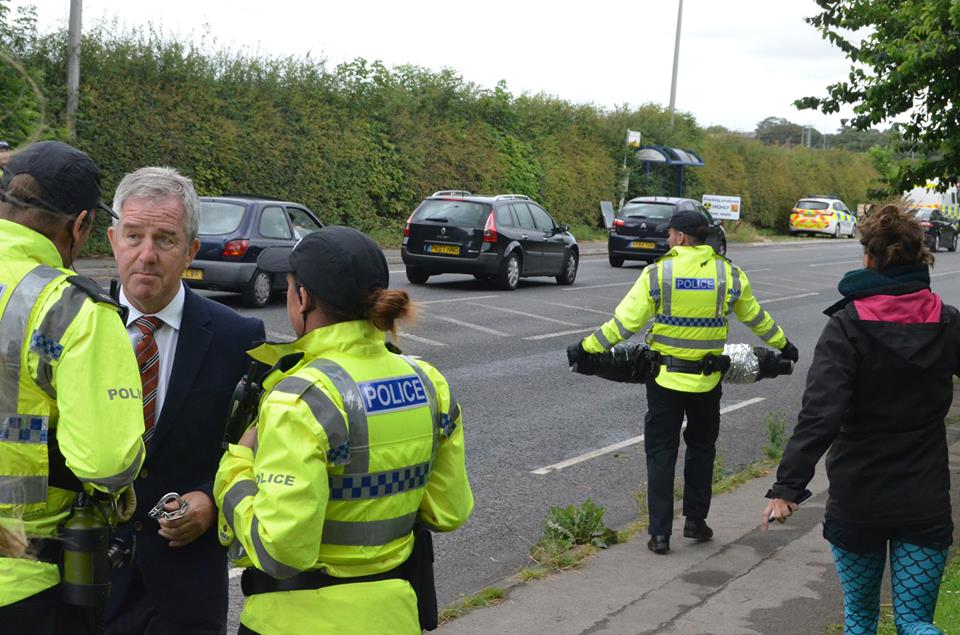 Police removed an arm-tube from a Sky TV reporter filming at Preston New Road as he tried to demonstrate how the protest device worked. See DrillOrDrop report

Opponents of oil exploration at Broadford Bridge gather at the gate for a meeting with MEP Keith Taylor, 20 July 2017. Photo: Jon O’Houston

An MEP for South East England called for a review of guidance to officers policing protests in Sussex and a rebalancing of rights between protesters and drilling cmpanies. See DrillOrDrop report 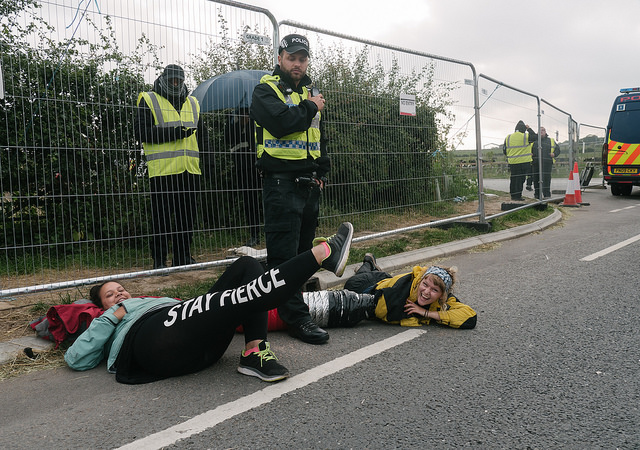 Five women from Leeds blocked the entrance of Cuadrilla’s Preston New Road shale gas site near Blackpool, in a protest about climate change.

The women, who locked themselves together through tubes, called for the development of renewable energy and an end to fossil fuel extraction. The protest was part of a month of action organised by the national network, Reclaim the Power.

Skye Golding, one of the activists said:

“We’re here today to stand with the local community, but also to think about the bigger picture. Across the world there are 300,000 lives lost a year as a direct impact of climate change and this will only increase with the development of a new fossil fuel industry. Those least responsible for global warming are the most affected. They did not ask for these impacts, just as the community of Lancashire did not ask for fracking”.

The women said they had also travelled from Leeds for fear of impact on water supplies and treatment after discovering that waste water from the Cuadrilla site would be travelling to the Knostrop treatment works in Leeds. 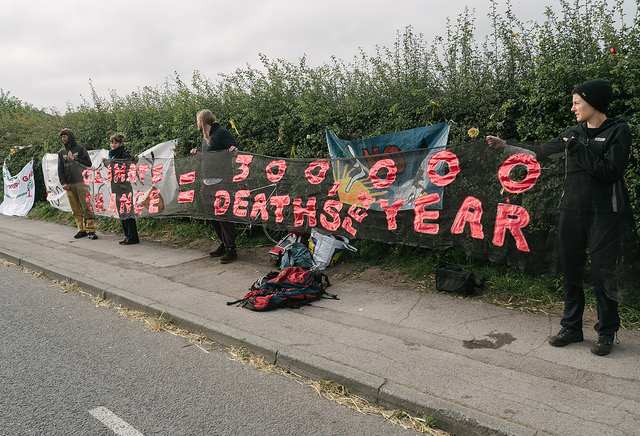 Coralie Datta, another of the activist at the site, said:

“In countries where fracking is already happened there are repeat cases of water contamination, both in the ground and during the treatment process. The process of treating post-fracking water in the UK is unknown but Leeds’ Knostrop treatement works is one of the few sites in the UK that has been designated to take fracked water and that is a huge concern to me”.

Police were filmed trying to move a man in a wheelchair out of the road before the arrival of a delivery vehicle at Preston New Road.

According to the video, two officers overturned the wheelchair in the middle of the road.

Lancashire Police made a statement on Facebook this evening about the video:

“As is clear from the footage, the man appeared to be wheeling himself into the carriageway in between a police vehicle and directly into the path of a lorry that was being escorted to the site.

“Officers on scene have taken immediate action to keep the man safe and prevent him from being injured by moving him out of the carriageway and back towards the central reservation.

“During this intervention, he unfortunately fell backwards and came out of his wheel chair.

“His welfare was addressed at scene by officers and at this time no complaints have been made by the individual concerned. Our first priority is to keep campaigners and everyone else at the site safe and this will remain paramount.”

A woman who was filming outside the site reported she was knocked unconscious by police and needed hospital treatment.

The protest organiser, Reclaim the Power, said the action was in support of a campaigners in the Italian town of Melendugno, in Puglia, who are trying to stop the construction of a 3,500km gas pipeline from Azerbaijan.

One of the activists, Jake Woods, said:

“I’m blocking Cuadrilla’s fracking site today to say no new dirty gas, here or anywhere. Gas is being sold as a clean, green fuel but it’s a bridge to nowhere. From Lancashire to Puglia, communities across the globe are causing serious headaches for the fossil fuel industry. We will not let them ruin our homes for this polluting fuel.” 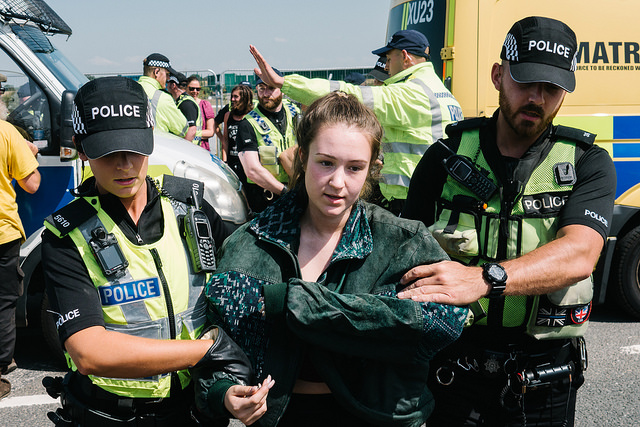 “Traffic was brought to a halt for around an hour as officers worked to release the protesters. Police initially blocked the entire road but later opened one lane.”

Derbyshire Police said eight people were arrested during protests outside the headquarters of the drilling equipment supplier, P R Marriott at Danesmoor, Clay Cross. A police statement said seven people were charged with offences including aggravated trespass, obstructing the highway and assaulting a police officer.

The statement added that a total of 25 arrests have been made and 15 people have been charged since the protest began at the Derbyshire site.